Getting Started with Kubernetes: Architecture Basics and Definitions

This series is intended for engineers new to Kubernetes and GKE. It provides a basic overview of Kubernetes, definitions and a quick start for building a Kubernetes cluster in GKE and your first multi-tier webapp. If you are looking for more in-depth help, get in touch.

Getting started with Kubernetes requires some basic architecture understanding. Here we summarize master and worker nodes, the Kubernetes architecture and definitions of pods, labels, selectors, deployments and services.

There are two primary types of machines - masters and workers - both referred to as nodes. Most often when someone refers to a node, they are talking about a worker node.

Master nodes do a few things:

Note that if you’re on GKE, EKS, AKS, or another managed Kubernetes service, you won’t need to worry about running master nodes.

You may have also heard about the Kubernetes "control plane". This consists of the master nodes, as well as the kubelet process running on worker nodes. The Control Plane:

Worker nodes are where “stuff” gets done and where all your apps will live. Workers: 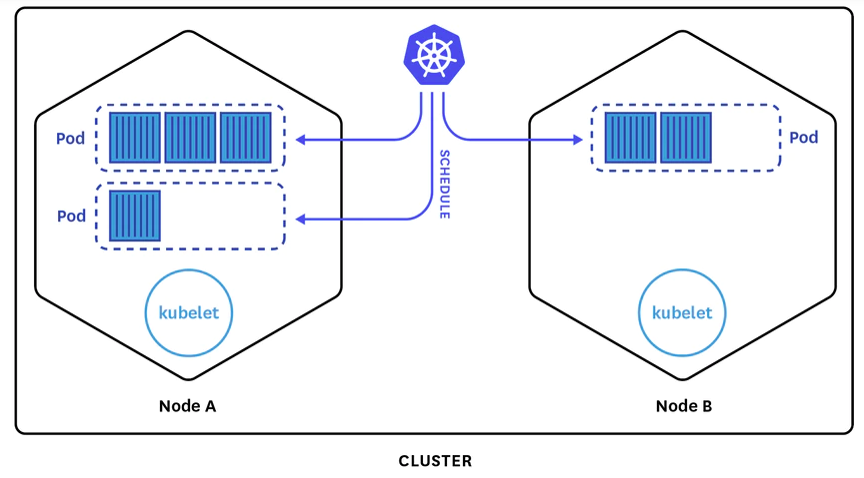 In the center, you can see the Kubernetes logo. That signifies the control plane. If you are using a managed service like GKE, that control plane is managed by the service.

The API runs in the control plane. When issuing a kubectl command, this is what you’ll be talking to. As workloads are submitted to the API, the API will schedule them on various worker nodes.

This diagram also shows Node A and Node B. Every worker node runs a kubelet, which is a daemon process that communicates with the master nodes the amount of available resources, what work is pending, and if work can be scheduled to the node it is managing.

There are then representations of a few pods. Pods are a group of Docker containers that are scheduled on a node.

All work is submitted to the Kubernetes API as these groupings of containers, or pods. For added resiliency, Kubernetes can distribute multiple replicas of the same pod specification across different nodes, so even if one crashes, you’ll have a backup.

Here are vocabulary and concepts that are important to know when you start working across the Kubernetes API.

Kubernetes is organized into a series of objects for your typical CRUD operations i.e. create, read, update and delete through the API.

A pod is A set of one or more containers scheduled on the same physical or virtual machine that acts as a unit. When you create a declaration of the pod, you can define this with any number of containers that live inside of the pod.

Pods also share a network internally - a private network shared whenever a pod is scheduled across all the containers inside the pod. They can also share filesystem volumes. Similar to Docker that uses -volumes-from, it’s the same concept with Kubernetes when running multiple containers inside a pod. You can share ephemeral or copy-on-write style storage from within the pod.

Typically you won’t create a pod directly - instead you’ll create a higher level object like a Deployment or StatefulSet that includes a pod specification (see below).

A deployment is an abstraction to the pod. It allows you to have extra functionality and control on top of the pod to say how many instances of a pod you want to run across nodes or if you want to define your rolling update strategy (for example only roll one pod at a time, wait 30 seconds in between). This allows you to control your deployments based on your requirements in order to have zero downtime as you bring up a new process and deprecate old ones.

Here you can see this deployment is called “webapp”. It desires two replicas to exist.

It finds and manages the pods spawned by it using the label selector, which is set to “app: webapp”. Below that you see the abbreviated template for the pods it will spawn, which will have the label.

Every Kubernetes object gives you the opportunity to attach metadata through labels - a series of arbitrary key-value pairs attached to objects. Typically, these are identifying attributes that are meaningful to users making declarations.

Labels inherently do not imply semantics to the core system. This means that there’s no functionality that you are going to get out of labels explicitly that is important to the Kubernetes systems. Instead, they’re utilized by DevOps teams to query for particular sets of objects.

Labels are very important as they can be used to orchestrate, attach and identify different objects with the Kubernetes system. Labels can be attached to an object via create or update operation. You can either attach a label when creating a pod or apply a label to a pod already running through an update.

We expect many objects to have the same labels because labels are not unique. For instance, you might want to label all the resources associated with your website frontend as app=frontend, while all the backend resources get app=backend. Or maybe you want them both as app=website - the way you utilize labels is entirely up to you.

Here’s what a snippet of a label might look like inside the context of a Kubernetes YAML definition:

You can designate labels to be anything that you want with any sort of semantics that make sense to you, because these are yours to be able to orchestrate different things within the Kubernetes systems.

Selectors give you the ability to take Kubernetes objects and interrelate them to different objects with labels already applied. Selectors identify a set of objects through filtering. The set of objects that are identified and filtered have the relevant labels.

Empty selectors will match all labels. In this example, the deployment will apply to pods that have the label `app:redis`.

Outside of just the context of containers and metadata are services - key to Kubernetes. A service is a network construct that defines a consistent way to access pods. If you submit a deployment to the Kubernetes API and that deployment spins up five different pods of a web service, you’ll need a way to route HTTP traffic to  those pods, with load-balancing methods like round-robin(for example). You’ll use a service to do this.

Here is an example of a YAML definition of a service. We have a metadata section with the service named webapp. On line 15 we have a selector. The selector is a key of app with a value of webapp. It means that every pod you have running with the label of app and value of webapp is relevant. Any traffic that accesses this service will be routed to a pod matching that label. If you have five relevant pods, but then one crashes, the service will know the pod is no longer healthy and thus only route traffic to the remaining four until another pod comes up.

The same holds true for horizontal autoscaling. For example, if you have ten pods running that are resource constrained, Kubernetes can spin up five more pods with the same labels to handle the load. It is the services’ responsibility to understand that there are now 15 pods and traffic must be distributed accordingly.

Services provide, within the cluster, a way to load balance between pods. Services can also talk to external cloud providers and spin up cloud resources such as cloud load balancers, e.g. application load balancers (ALBs), elastic load balancers (ELBs). This is why Kubernetes really is cloud native: there is a lot of functionality built into the system to be able to integrate with whatever cloud provider you might be working on.

There are four types of services.

1. ClusterIP: exposes the service on an internal IP

This is typically used for services only accessed by other workloads running in the cluster. Redis is a good example of this. You probably don’t want your redis data store to be accessible from the public internet to read/write from. You would assign a ClusterIP service to a redis implementation running in your Kubernetes cluster so it can only be accessed by other workloads inside the cluster.

2. NodePort: exposes a service on each worker nodes IP on a static port

Say you have a deployment that spins up pods running on three machines in a five node cluster. If you assign a node port service to this, it would statically map a port directly on those virtual machines and would be accessible from the IP, not assigned to the pod, but to the IP assigned to the actual nodes they are running on.

This is useful if you are running daemonsets and you have log aggregators of monitoring systems that need to be available.

Be careful of port collisions or pod rescheduling.

4. ExternalName: Maps the service to an external name via a DNS provider returning a CNAME record

Similar to LoadBalancers, although ExternalName has interaction directly with the DNS provider.

Now with this understanding, we’ll show you how to spin up your first Kubernetes cluster on GKE.